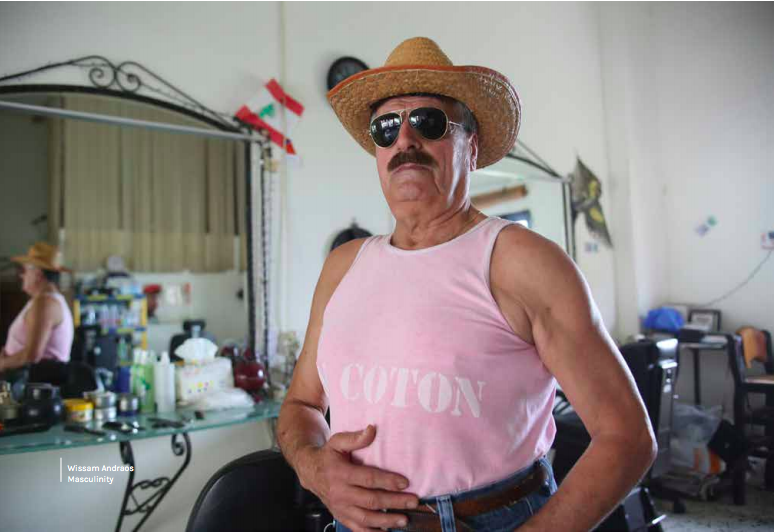 I am an aggressive hyper-masculine Lebanese man. And, as such, of course I’d start this article by being direct, if not confrontational with you, my reader, because that’s how I’ve always been and it’s worked out fine. Why would I waste my time with the nuance of an analogy that captures some subtle expression of masculinity and the patriarchy? If anyone wants to criticise my approach, I’ll stand my ground, unwavering, and concede only the minutest of points. And if that doesn’t work, I’ll escalate, make the problem about something deeper and more offensive. What’s important is that everyone knows I am more willing to enter into a conflict to get my way than to have to listen to anything that I don’t agree with.

As a child I grew up fast, by six I could turn a tree branch into a wooden knife. I had a little troop of boys my age and a little older who used to walk around the school yard and bully the younger boys. I’m not proud of it, but I was smaller than the other boys, so nastiness had to compensate for size. A few years later I started to play rugby, I got bigger, meaner, and learned how to objectify women. By the time I was 15 I was full-blown macho. I thought that I could impress everyone and beat up anyone who I couldn’t. Overplaying my gender role worked quite well and our society was hugely responsive to my pubescent notion of my masculine self, so I kept at it. As I grew up into my early twenties I did what worked; I acted like an oversized rooster, talked big, sang loud, puffed up my chest and did what I wanted, especially if it was deviant. The incredible thing was that everyone around me seemed to accept and even embrace my attitude. I was fully aware of the imbalance between myself and others who could not be as macho or overtly aggressive and still, almost everyone treated me like I was doing what I should have been doing. My experience growing up socialised as a hyper-masculine male was not unlike many of the Lebanese men that I know. It’s the way we, the majority of Lebanese men, have been taught we should behave as men. We use aggression and force to solve many of our daily problems. I was good at it and it brought me far in life, until I knew it needed to stop. Where my aggression didn’t work well was at home. The transmogrification of the little terror into a thumping opinionated young man did not fare well within the context of my immediate and extended families. Because, while we are expected to act like ‘men,’ we are also expected to maintain reverence to the strong men of the tribe throughout and this I could not do. The overly-masculine, rejectionist and abrasive self that I had constructed could not accept that there were other men who could, by default rather than merit, wield power over me due to the sequencing of their birth. Almost as soon as I began to question the legitimacy of their power, I began to question the legitimacy of mine.

It started in my mid-20s when I realised that to continue to learn in this life, I needed to stop being pig-headed and start to accept others’ viewpoints as, at least possibly, worth listening to. So I became a journalist. I also began to realise that maturity only comes after a tremendous amount of concerted effort in examining one’s own mind and ego. Over time I also began to see how our concept of masculinity helps glorify the type of arrogant, violent and domineering behavior that is destroying any hope of reforming our politics and society, and reflected in the way we are governed. Even many (mostly male) activists, journalists and others whose job it is to lobby for reform in our society continue to feel that their role is merely to reject what they disagree with and project their feelings in the most abrasive forms possible. And it is precisely this approach which creates the vicious and contradictory circle that keeps us where we are in our society. If we men were merely aggressive rejectionists, then at some point we would also challenge the top-down patriarchal structures that govern our homes, schools, religion and politics to be something more horizontal and inclusive. But because we are also taught to perpetuate the topdown structure, male aggressiveness is channeled to target those who are less empowered to fight back, thus quashing any opposition to the structure itself. When I began to challenge the power structures in my own home, the result was pure and protracted conflict, at first. It was not until I began to understand that the battles I was having were more about my knee-jerk rejectionist attitude and lack of viable alternatives than any deep injustice I was enduring. Once I began to seek out alternative arrangements that everyone in my family circle could live with, things began to resolve themselves and I became less angry.

Having grown up in the information age, my younger male cousins were also developing alternatives to aggressive behavior. As they matured, it was clear that their rejection of the overriding male power structure was less abrasive than mine. Without the drama of arguments and fisticuffs, they quietly carved out their own alternative existence by using the wealth of resources that the information age progressively provided for them. At the same time, the older generations reacted accordingly, almost knowingly, by retracting their insistence on an antiquated method of familial, educational and societal imposition. The combination of more information and rejection of overly masculine power will not necessarily be the key to change in Lebanon; if anything this country has proved that there is no silver bullet that can solve our problems. But as the men of this nation, no matter how jaded our past, it’s time to start thinking about who we want to be when we finally grow up.

First published in FRAME in the Spring of 2016

Sami Halabi is a policy consultant who covers a range of policy issues and analyses development programmes, particularly in the Middle East and North Africa. Sami specialises in analysing policies and programmes in order to provide evidence-based recommendations to policy-makers and international development agencies. Sami holds a Master of Public Policy with Distinction from The University of Edinburgh. View all posts by Sami Halabi